How urgency stops you being at your best 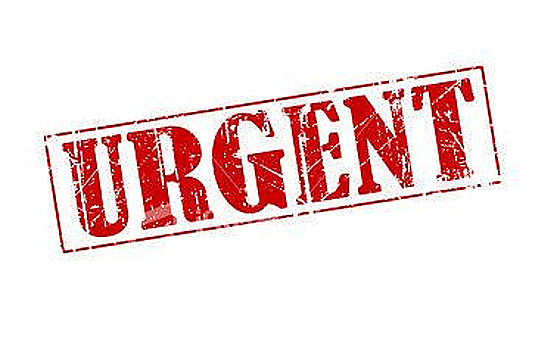 The human temptation is to prioritise taking action on what is urgent. Urgency is a state of mind, in which you have the feeling that you ‘have to act now’, to avoid a perceived unpleasant consequence. People use creating a sense of urgency to attempt to manipulate their own and other people’s thoughts and actions, sometimes through over-committing themselves or others.

It is a way of getting a result, but the quality of the result could be far higher if people used a different mechanism.

The human mind operates on the basis of being 5 times more inclined to perceive a threat than it is to see a possible reward. On a day to day basis, it operates like a radar scanning for danger, and putting 5 times as much effort into that as it does scanning for opportunity. It is scanning for the danger of exposing feelings associated with a threat – fear, failure, anxiety, shame, isolation, humiliation, rejection, unfairness etc. When it perceives a danger or potential threat, the ego part of the brain automatically takes over and without thinking, drives the owner down a well practised path of self defence to escape the immediate perceived danger.

It is a reactive, automatic process, and one that requires no thinking from the individual affected. Their thinking, if you could look inside their brain would be something like‘what do I have to do to avoid getting caught out here?’, or ‘what will keep me looking good in this situation?’ They are thoughts of self defence.

This reactiveness becomes an addictive form of behaviour, as by avoiding the perceived threat, you experience a brief reward by feeling relief – the threat is no longer there. The mind will create urgency in order to get this feeling of relief. It is not long lasting however, and within minutes, the same mechanism is back scanning the environment for danger, the feeling of relief forgotten.

Whereas this ‘fight or flight’ reaction may be fine in certain circumstances, when over used, or in situations that do not represent a real threat, it diminishes the person’s ability to be at their best, as it is always has the primary purpose of self protection. Putting all your energy into self protection means that there is nothing left to work towards creating a more productive, longer term outcome or solution to the situation, and there is no room for the quieter, more productive parts of your brain to contribute.

People at their best are not using reactive same thought patterns. If you could look inside their heads, you would see a different process. They have made a considered response in relation to a stimulus (moving beyond the automatic behaviour in reaction to a perceived threat), and have chosen their action.

On the outside, you may see a calmness; a peaceful, powerful intentionality in their way of being. They are not acting primarily in order to defend themselves, as although they may perceive a threat, they are able to work beyond their mind’s automatic reactive processes, and are tapping into a different part of their brain. Their efforts and actions are in line with a different perspective – perhaps ‘what works best here?’, or ‘what has to happen for this to move ahead?’

They have taken a conscious responsibility for their behaviour, choosing their behaviour in response to the circumstantial stimulus, rather than being reactive.

Responsive behaviours involve a pause to inwardly reflect on what is possible beyond just self defence. That pause is critical to see and stop the automatic escape or fight mechanism running its course.

So next time you find yourself feeling driven by urgency, just pause and check in with yourself. Ask yourself ‘who is running the show right now – my ego (defence) or my better self (looking for an outcome which is in line with my values)?’ That pause to question is in itself often enough to choose a path which will give you a better outcome than just survival.

Paul Stonehouse is an experienced coach, educator and speaker, and is completely committed to helping people perform at their best. His particular passion is helping people move forward when they are stuck, enabling them to live and work a in a way which is a confident expression of their true selves.
View all posts by theclaritycoach →
This entry was posted in coaching, Uncategorized and tagged beliefs, Business, clarity, Creativity, fear, feeling stuck, habitual patterns, health, Inspiration, Life, mental-health, present, Relationships, Spirituality, Suffering, Thoughts, unhappy. Bookmark the permalink.